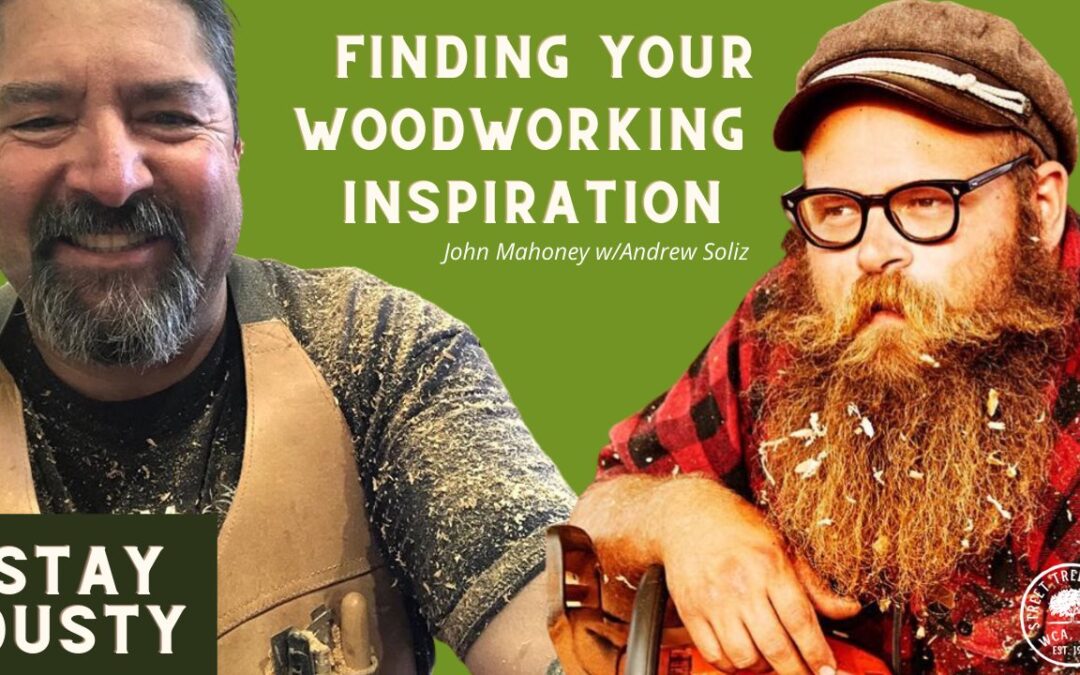 Finding Your Woodworking Inspiration with

This week’s Stay Dusty guest, Andrew Soliz, is a great example of keeping family traditions alive and bringing your heritage to life. We love speaking with him and hope his story and journey will help you in finding your woodworking inspiration.

Andrew and I met out in a dirt field next to a giant stack of firewood and He’s been a good friend of mine over the past eight or nine years; he’s been with us through our whole journey. I find so much inspiration from him all the time.

From soul work to woodwork, Andrew brings his own natural style into everything he creates. He is a master carpenter and traditional wood craftsman, who creates unique pieces for the home, garden, or office.

Andrew’s artistic themes draw on his background as a traditional Lakota Ceremonial Man. Andrew’s family name is Tatanka Mani which means “Walking Buffalo,” which is why he chose to name his company Tatankamani, and he chose a Buffalo as his logo. Nature is his muse. From sculpture to furniture to home building, each piece is an artistic translation of the natural materials he works with. By listening deeply to the Nature of all things, he brings forth unique artistic expressions of strength, beauty, and grace.

His family lives on a Lakota Indian Reservation in South Dakota.  He always taught him never to live anywhere with more people than trees. When trees are at the edge of our lives, people can give them life in another form so they keep living with us and keeping our tree relatives close.

His pieces are intended to inspire and stimulate one’s own connection to the natural world, People don’t get out into nature enough anymore. People are drawn to this style because it brings nature back into their houses and makes their hearts happy.We are so excited to have him share his time with us, so we can learn more about how we can find our own woodworking inspiration.

He visits us on a pretty regular basis to find pieces of wood that speak to him. When he gets a phone call from a client, he has them visit his shop that contains his library of wood. He lets the client choose the slab of wood that speaks to them, and they discuss what the client is looking for, allowing Andrew to have some artistic freedom of course.

Once the outline has been discussed, Andrew will sit with the slab for a few days, talking to the wood, asking it what it wants to be. He lays out some lines on it, moves it around, examines the grain. Before you know it, the saws are carving, the dust is flying, and the chisels come out. He will sometimes stay up as late as 2am getting lost in his work.

Almost as much as nature inspires him, music is also a huge inspiration when he is working and designing.  Depending on what he is doing, it goes from Mozart to Chopin to Led Zeppelin to John Coltrane. The music inspires a lot as well, getting Andrew into the flow state.

Andrew feels that what he does is coax out the wood’s natural beauty. He doesn’t feel he does much more than that. For example, Andrew made this beautiful black walnut coffee table. It was a perfect example of a design where the client and he worked together to come up with. It was supposed to waterfall off one end and a leg at the front. But when he started putting it together, he realized the wood had a different design idea in mind. Sometimes, you can force a piece to be something it’s not, but that’s not Andrew’s style, he prefers to let the wood be what it wants to be.

Andrew uses hand tools as frequently as he can. But on certain areas, he still goes for the power tools.

Working with his favorites

Some of his favorite urban woods are black pistache and walnut. Carob and olive have been fun as well; the olive smells particularly good. He loves mixing woods together, and as many of us he loves the smell of Camphor. He was working on a table and after he oiled it up, it took away the camphor smell, so he carved out scallops into the bottom to release the smell again. Even though you can’t see it, at night, you can fall asleep to that wonderful smell. It’s a medicinal tree.

Andrew’s top three tools are his Laguna band saw, his drum sander, and his Domino joiner.

He is a purist when it comes to the actual finishing. He uses boiled linseed oil primarily, but he also started using a new all-natural oil.

Once a piece is together, he has a beautiful ritual. He sits with the piece and burns sage, thanking the tree for its life and asking it to continue living.

Introducing Live Edge into his designs

Andrew first used live edge in his designs when he started working with us. He had done traditional furniture in the past, but that live edge seriously triggered his imagination.

One of the first projects which we worked on together was a cookie pathway in Andrew’s backyard. Andrew describes his backyard as “layered, inspirational, magical, whimsical, and beautiful.” I totally agree. We had these giant 60-inch in diameter pieces of Torrey pine, and we created a beautiful pathway out of them. It took two or three truckloads to get them all done! “When you see the invisible, you can do the impossible.” Andrew is never scared to tackle a big project, he truly has no limitations. Check out some his incredible work below! 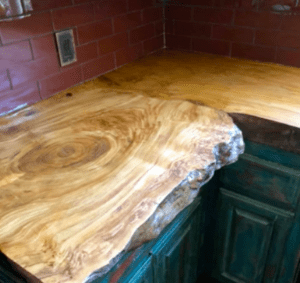 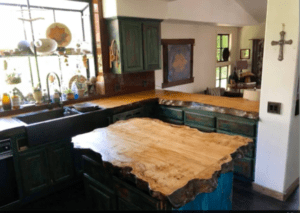 Another early project was Andrew came to our shop where we had our kiln set up. He found a couple American elm pieces from one tree and turned it into a kitchen counter and backsplash surrounding a gas stove. He also created an island out of wood for his kitchen. The edge reminds Andrew of a buffalo hide. Andrew’s grandmother taught him you won’t cook well when you’re not in a good mood, so that’s why he’s worked so hard on pieces to allow him to feel good in his kitchen.

For his kitchen counter, most people run a traditional miter in the corner. Instead, he tried to align the live edges and tie them into there. The grain transfers look super cool.

Another fun piece of Andrew’s is this giant cutting board. As soon as he oiled this piece up, it sold. He started making them bigger and bigger, and the more ridiculously large he made them, the faster they sold. It’s beautiful for charcuterie. 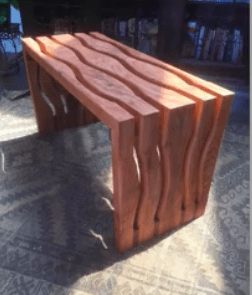 A boutique in San Clemente requested a bench for their dressing room. Andrew had fun with a jigsaw, and it came together beautifully.

Jackets are traditionally thrown away at the sawmill; it’s the first cut off of a log. I’ve always thought they were super fun but Andrew used one as an archway in his backyard! What an awesome and fun utilization. 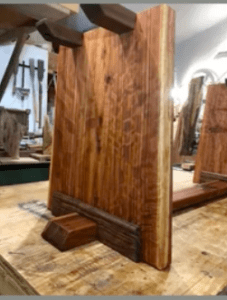 Another piece joins redwood with black walnut. One of the legs is notched up so that air goes through it, which is super cool. There is another piece used to lock it in. All wood joinery. All wood all the time.

What Andrew loves about his work is he never makes the same thing twice. Each piece is one of a kind. He has no idea what happens to each piece when it leaves the shop, but he hopes they bring people happiness. He hopes they see art rather than just seeing a dressing room bench.

The Sawdust Festival is the longest-running art festival, purely local artists, in Laguna Beach. It’s really the only one of its kind in the world, and it’s been running for over 50 years. The festival is 67 days, 12 hours long, over the summer where you display your work, showcase your craft process, and interact with other artists and buyers.  People travel in from all over the world. It’s a lot of fun.

Check our or favorite recent posts HERE and HERE!